The Foundation for Business Aircraft Records Excellence (BAR) began after several aviation industry veterans experienced frustration with the dismal state of record keeping in the industry. 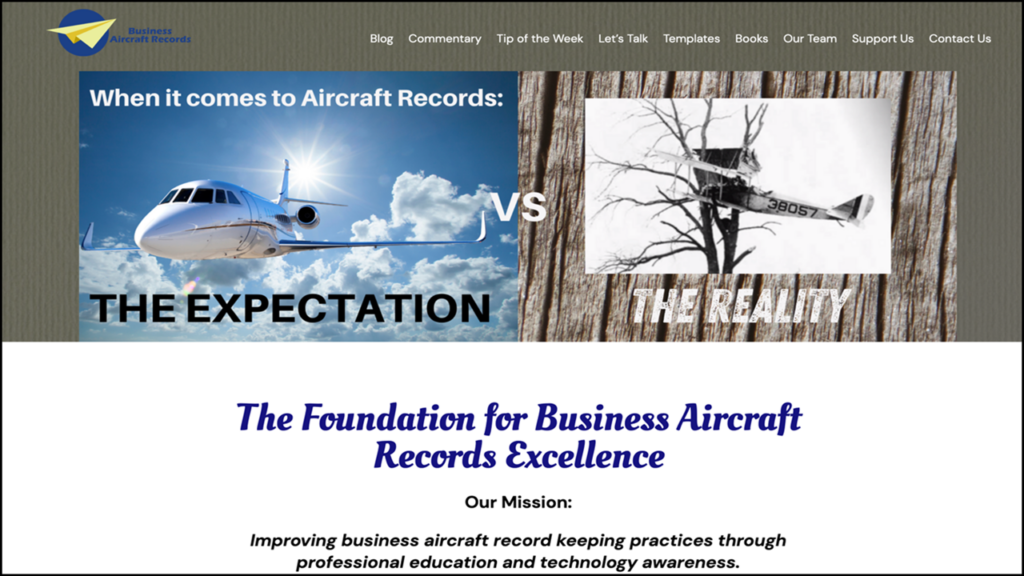 Larry Hinebaugh, the Executive Director of Business Aircraft Records, will be kicking off the collaboration effort to develop an education program to improve aircraft record keeping at the NBAA Convention in Las Vegas, NV on October 12-14.

Although many aircraft owners and flight departments have suffered financial and operational losses resulting from poor recordkeeping practices, the business aviation industry stubbornly sticks to its traditions, sometimes to its detriment.

Aircraft have lost resale value, or even lost their airworthiness because of a misplaced, a not properly completed, or even a destroyed record. And in each case, the disaster was entirely preventable if aircraft maintenance personnel would have followed best practices.  “It’s time we take the same care with the aircraft’s records as we do with the actual aircraft,” said Larry Hinebaugh, the Executive Director of Business Aircraft Records.

“Until we actually change the way things are done in the aviation industry, the state of aircraft records is unlikely to improve.  Inertia is on the side of the status quo. Current DOMs and techs have become successful doing things “the old way” with little incentive to change.”

To that end, the organization has determined the best way to fulfill its mission of improving the state of aircraft record keeping is through education. Infiltrating aviation training and education programs at universities, colleges,  and technical schools is one of the best ways to get the next generation following best practices we all agree we should follow. These organizations need course outlines, reference materials, teaching guides, and course content to cost-effectively supplement their curricula; including reasons for using best practices, practical examples to follow, tools, templates, checklists, etc.

Today’s students demand both high-quality online and digital courses. BAR, with the support of industry, will develop a world-class online learning management systems (LMS) that will allow access to all the BAR resources and courses by any student or instructor – anytime and anywhere. To fully support the industry, BAR will also provide focused and dedicated seminars and workshops at conferences, educational institutions, and aviation events as needed.

BAR is seeking sponsorships and expertise to assist in this effort.

Organizations likely to benefit the most from sponsorship include:

About the Foundation for Business Aircraft Records Excellence (BAR)

Over the past year, the Business Aircraft Records group has promoted best practices in the aviation industry in the following ways:

Twenty years ago, Larry Hinebaugh’s maintenance consulting company, Aviation Consulting Group, was in full swing. Having already been an A&P for over two decades, including several years as a Field Service Representative with Gulfstream Aerospace, and as the Director of Maintenance for Caesar’s World’s Corporate Flight Department; Larry found himself doing what almost every independent VIP aircraft maintenance consultant at some time does … auditing an aircraft’s logbooks looking for information to prove its airworthiness and value on behalf of a potential buyer.

“Why?” He thought, “Are aircraft logbooks so difficult to work with?”

Fast forward to today, and many aircraft logbook audits later, and he still feels the same way. Only now, Larry has spoken with enough aircraft maintenance people to know that he is not alone.

The administration of aircraft records, it seems, is only a necessary evil in the minds of most maintenance technicians, and so they are treated as such.

But with an average set of aircraft logbooks proven time and time again to be valued at as much as 30% to 50% of the value of the aircraft itself, and with both the safety and airworthiness of the aircraft dependent upon them; Larry felt the industry should find this completely unacceptable.

“It is excellence in aircraft recordkeeping that should be the goal of our industry”. With that in mind, Hinebaugh created Business Aircraft Records with the mission of Improving Aircraft Recordkeeping Practices through Professional Education and Technology Awareness. He and his fellow Directors, Bill Johnston, Dr. Sean Gallagan, Trey Bryson, and Adam Sipe believe that improving aircraft record keeping will not only benefit business aviation but will also go far in enhancing the image of the aircraft maintenance professional at the same time.