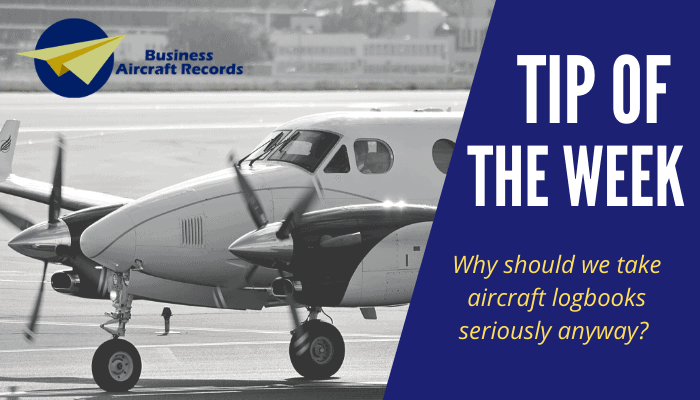 The entire aircraft maintenance record, commonly referred to as “The Logbooks” are the documents that back-up and support the Statement of Airworthiness of an aircraft and its component parts.

Other than the aircraft itself, it is the condition, organization and completeness of the maintenance records that has the most profound effect on the value and perceived airworthiness of an aircraft when the aircraft is bought or sold; or worse, involved in an incident or accident.

However, if information necessary to prove the aircraft’s airworthiness is missing from the record; the FAA considers it the same as if the event never took place … and the aircraft is determined to be Unairworthy. In this case, being found to be unairworthy, the aircraft cannot fly again until the issue is resolved.

One missing document may mean the work must be performed again, wasting both money and the time the aircraft would otherwise be available to fly. Top aircraft appraisers and financial institutions want to see well-organized, easily retrievable, protected maintenance records that provide evidence of the legal airworthiness of the aircraft.

Additionally, when an aircraft is involved in an incident causing damage, personal injury, or loss of life; chances are a lawsuit will follow.  In this case, maintenance records (or lack thereof) in an aircraft’s logbooks will either convict, or absolve, the aircraft owner and maintenance personnel having worked on the aircraft. Why?

Because good records reflect a well-cared-for aircraft. Good records also save expensive maintenance time having technicians research the history of the aircraft when they need to.

Good business aircraft record keeping is critically important to maintaining an aircraft’s Airworthiness and value; and, it communicates a compelling testimony in support of the professional management of each aircraft and maintenance personnel involved.